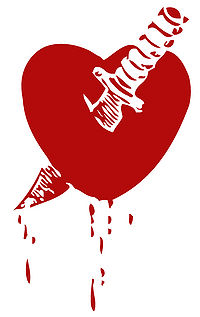 There are many inherited causes of bleeding, but trauma from having a knife put through your heart, or "cardioknifeoly", is not one of them.

There are a variety of disorders that cause the blood to be unable to clot properly. Basically meaning you end up bleeding a lot.

This is the commonest severe inherited bleeding disorder. Basically, you get a deficiency of factor VIII, so you can't clot properly. This means that if you cut yourself, you may not stop bleeding. This is obviously a big problem, especially if you start bleeding internally.

It is an X-linked recessive disorder, affecting 1 in 5000 men. Some people have it severely, moderately or mildly. This means they may need regular treatment with factor VIII injections, or they might only occasionally need it after trauma, or before operations.

Because a lot of haemophiliacs needed blood transfusions in the past, before proper blood screening took place, many of them have HIV and hepatitis as a result.

This is 10 times less common than A. It is caused by deficiency of Factor IX rather than VIII. Aside from this, the clinical picture is exactly the same.

This is actually more common than haemophilia A, but the vast majority have very mild forms. Generally it is autosomal dominant, although it can be recessive. It's an absense of von Willebrand factor, which is used for binding with Factor VIII and for helping platelets bond with endothelial surfaces.

In mild forms, treat with desmopressin, which raises vWF levels. In more severe forms, patients will need to be given Factor VIII/vWF concentrate.

Patients are often prescribed warfarin or heparin, in order to prevent thrombus formation, for example in patients with an artificial heart valve, atrial fibrillation, DVT and PE. Their INR levels must be carefully measured, in order to ensure they are not too high - in which case bleeding can occur - or too low, causing clots.

Coagulation factors are produced in the liver. So when the liver is screwed, it produces less - so ability to clot reduces. In early liver disease, generally just the prothrombin time is increased. As it gets more damaged, the APTT and bleeding time increase too.