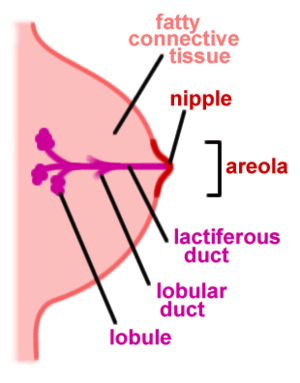 Tits have a fairly basic structure. It all centres round the nipple:

There is only really 2 key functions of the breast:

The process of milk production and release occurs during breastfeeding:

T4-T6 innervation. The nipple is in the T4 dermatome.

This is important in breast cancer! The majority of the drainage (75%) is to the axillary lymph nodes. The rest drains to the parasternal and abdominal nodes.