There are essentially two places breast cancer can arise from:

These are the four most important but there are others factors which affect risk:

The most important feature is a lump in the breast and 1 in 8 with a painless breast lump (90% of cancers are painless) will turn out to have breast cancer. Other features include:

Other questions to ask in the history are: when the lump started; any change in size; menstrual history; any changes in the menstrual cycle; and family history.

On examination the key is to try and differentiate between breast cancer and benign breast disease. A hard, painless lump; irregular margins; fixation to chest wall; skin dimpling; unilateral discharge (with blood); anything else mentioned above: are all signs of breast cancer.

If these things aren't present or the opposite is true (e.g. regular rather irregular) are suggestive of benign breast disease.

In 1987, the NHS started the National Health Service Breast Screening Programme (NHSBSP - I thought I'd put it in so if you see it, you know what it means). This screening is done by mammography which is offered between the ages of 50 and 70 and it should be done every 3 years. It has been shown to significantly reduce the mortality rates in 55-69 year olds. 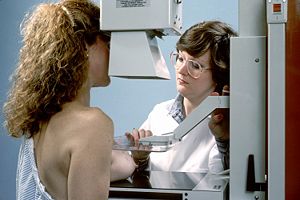 This is a breast. If you are here specifically for this picture, you are probably on the wrong website.

There are loads of investigations that can be done for breast cancer. Let's start with the important first-line ones:

The main three blood tests are to do with receptor status. Oestrogen receptor (ER), progesterone receptor (PR) and HER2 status are detected by monoclonal antibody techniques. These are done because they have implications for management.

Excision biopsy removes the whole lesion. Incisional biopsy removes part of the lesion and is used in large lesions. Open biopsy uses a radio-opaque needle, can be done under local anaesthetic and has few false negatives (used in non-palpable masses).

This is important in terms of both management and prognosis.

Ultimately, this should be based on what the patient really wants. No option is "easy" in breast cancer and so talking to the patient and helping them decide is the most important. Often, combinations of surgery, adjuvant chemotherapy and other medications (i.e. hormonal) are the best way to treat the cancer.

The options are wide-excision of the lump or a radical mastectomy (where the breast an associated lymph nodes are removed). In DCIS, simple mastectomy is performed i.e. the breast in question is removed.