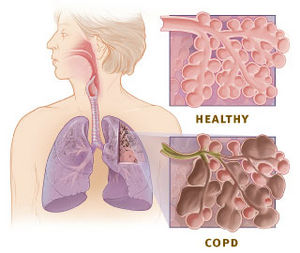 This is a good example of what happens. Notice the thickened bronchioles and the enlarged alveoli.

Mostly seen in older people, but about 1 in 20 of the population has it to some degree. So pretty bloomin' common.

Acute exacerbation of COPD can be a medical emergency, just like asthma attack, so you need to treat it fast!

The amount of cough and sputum is generally related to the degree of bronchitis. Basically, look for breathlessness, cough and wheeze, with no return to normal between attacks. It will be getting progressively worse too.

On respiratory examination there will also be:

If they are acutely presenting, and struggling to breath, it could well be acute exacerbation of COPD, or pneumonia. Either way, you need to treat that.

However, long term, basically, you get it and you slowly get worse. There's no cure.

You can go on oxygen with emphysema, but you have to be careful as the respiration mechanism in the brain will probably be based on pO2 not pCO2, so a sudden increase in oxygen level will stop them breathing.