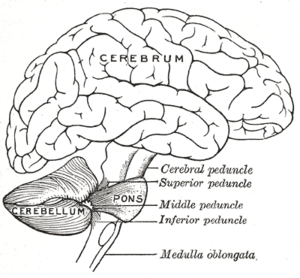 It would be easy to write 10,000 words on the structure of the cerebellum; none of this is likely to be relevant clinically.

Simply put, it looks like a mini-brain, hanging below and behind the cerebral hemispheres. It lies behind the pons, and is connected to the brainstem by the cerebellar peduncles.

The cerebellum plays an important role in learning and co-ordinating motor functions.[1]

It is basically a motor spell check: it reads the brainstem 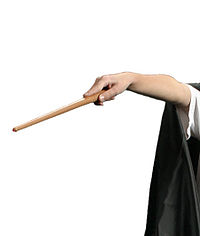 This magician has managed to make his entire body vanish. Sadly, he has also removed his cerebellum in the process, giving him the symptoms on the left.

through its connecting peduncles, looks at the motor and sensory information running up and down, and puts it all together to shout "You are going to fall over unless you contract this, this and this muscle!"

There are a series of key symptoms seen in people with cerebellar disease/infarcts. They love to test this in exams, so learn VANISH'D, and learn how to examine it:

The blood supply to the cerebellum comes from branches of the vertebral and basilar arteries. The three cerebellar arteries are[2] the: