Cognition is the processing of information gathered by the body's sensory organs, including the processing of knowledge. There are variety of manners in which cognition needs to be tested: orientation, short-term memory, attention, language and in other areas of cognition.

A test often done in geriatrics and psychiatry to determine whether somebody is cognitively deficient is to find out if the patient is oriented to time, place and person.

This is often used in patients to show they are clearly confused but from a medical cause (e.g. infection, delirium). It is worth doing in all psychiatric and geriatric patients on admission with a MMSE to follow.

It should be done on initial contact with the healthcare profession where appropriate in order to monitor a patients progress whether better or worse.

Ask each seperately with a point for each. When asking which season, give allowances for the fact that many months are between seasons.

"I'm going to say three objects. After I have said them all, I want you to repeat them back to me."

After they have repeated them say:
"I want you to remember those three items as I will ask you what they were later on."

Each object successfully repeated gets a mark, three being the maximum - eg: Apple /1, Table /1, Ball /1

There are two tests for attention and calculation, which are each out of 5. Do both and but only use the best score.

"I want you to take 7 away from 100. Then from the number you get, take away another 7. Keep going until I tell you to stop"

This often requires repeated explanation, especially to demented patients who are likely to be the subject of this test. Feel free to explain it to them again.

This test is simpler to explaing ask the patient to spell the word "WORLD" backwards. So say:
"Spell WORLD backwards." (OK - I probably didn't need to type that out for you.)

Ask for the 3 objects from the registration section with one point for each object correctly remembered. /3


Make sure you don't pick anything that the patient might not recognise like a pistol shrimp or the Organ of Zückerhandl from a short Eastern European. You get one mark for each.

Ask the patient to repeat a simple sentence. Traditionally this sentence is "no ifs, ands or buts". They are only allowed one attempt.

So say, "I want you to repeat the following sentence. 'No ifs, ands or buts.'"

It's one mark for the entire sentence /1.

This tests the ability of a patient to follow complex instructions so make sure you give all the instructions at once. The traditional way of doing this is to tell them to take a piece of paper in their right hand, fold it and put it on the floor.

So say: "I want you take this piece of paper, fold it in half and put it on the floor."

There's one mark for each command:

Write CLOSE YOUR EYES in large letters on a piece of paper and then ask the patient to do what it says on the piece of paper. There are no marks for reading the words aloud. Make sure your patient does not have any sort of visual impairment (e.g. having had a bilateral enucleation) as this will only prove they have a visual impairment, not that they are cognitively impaired. So say:

There is one mark if they close their eyes. /1.

Spelling, grammar and punctuation need not be correct but the sentence needs a subject and verb to get the mark /1. 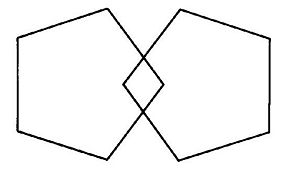 The pentagons must intersect and have all ten corners in order for the patient to receive the mark /1.