1.5 metres long, beginning at the caecum, running up the ascending colon which turns at the right colic flexure, at the inferior surface of the right lobe of the liver, along the transverse to the left colic flexure and down the descending, ending in the sigmoid. 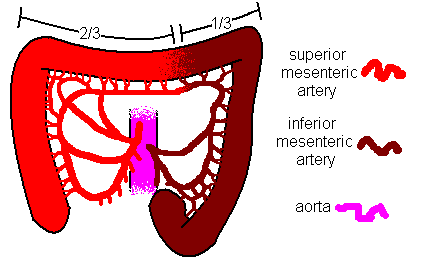 They all drain into colic nodes accompanying blood vessels, and then into the superior or inferior mesenteric nodes, depending on arterial supply to that part.

More mucus production than any other area of the gut due to having to lubricate lumps of semi solid faeces, so there are loads of goblet cells. More lymphoid tissue than other areas in the submucosa, to prevent invasion from resident and "guest" microbes. Still has taenai coli, however, the sigmoid colon doesn't have them, nor does it have the appendices epiplocia which cover the rest of the colon.

This congenital disorder most commonly occurs when the large bowel fails to descend into the right iliac fossa, meaning the bands that should fix it in place (Ladd's bands) cross the duodenum and compress it, causing extrinsic obstruction.

Ischaemia of the gut

Happens as a result of athromatous damage to the blood vessels supplying the colon. This can lead to tissue necrosis, and depending on the level of damage (mucosal, mural, or transmural) has a different prognosis. Total infarction, leads to a gangrene like state. When it happens, it often presents late, and with peritonitis, and circulatory problems, so prognosis is very poor.

About: Only affects the large intestine, does not extend to the small intestine. The rectum is almost always affected, and the inflammation extends proximally. There are reduced numbers of goblet cells and increased numbers of Paneth cells. Whilst normal crypts are short and straight, they get longer and branched, with inflammation no lower than the lamina propria. There will be random ulceration in the mucosal layer, which will only perforate in severe cases. Cause unknown.

Presentation: Diarrhoea containing blood, with pus/mucus. There may be abdominal pain.

Complications: 2% colorectal cancer, though this rises to 10% in patients who have had ulcerative colitis for 25 years. Haemorrhage is occasionally massive and life-threatening, but more often occurs as chronic blood loss leading to iron deficiency anaemia.

See this section on the anorectal page.