From MedRevise
(Redirected from Confusion)
Jump to navigation Jump to search 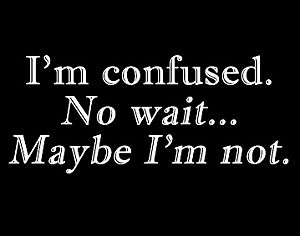 Confusion is a loss of orientation (not knowing where, when, who and what you are), often combined with a loss of memory. Delirium is a short term state of confusion, accompanied with altered consciousness.

Very common, especially in the elderly, or very ill.

As far as we can ascertain:

It's important to know the difference between dementia and delirium, although Lewy Body dementia can be misleading because it can fluctuate so wildly:

Dementia has a chronic onset. It is usually primary, and has a relatively constant state, worsening over months rather than hours.

Delirium has an acute onset, and is secondary to something else. It often causes sleep disturbance and affects consciousness levels, and fluctuates rapidly, over days rather than months.