If you give Superman hormonal contraceptives, although he doesn't lose his superpowers, he does grow breasts.

Contraception is the name for the act of pregnancy prevention. There are four key areas of contraception:

Progesterone and oestrogen are the commonest long term methods of contraception. They work by inhibiting the normal hormonal cycle of the menstrual cycle. They are available for women to take in 3 different ways:

How it works: Known as the pill, this is a mix of oestrogen and progesterone, taken every day for 3 weeks, then stopped for one.

How good is it: Taken properly, the pill has a failure rate of around 2/1000 women years. Taken badly or irregularly, it is much less effective. Because it is absorbed in the stomach, if the woman has any GI problems or is ill, it can be poorly absorbed. Because of its rare side effects, it is contraindicated in many people. You can use our starting the pill guide to help prescribe the COC! 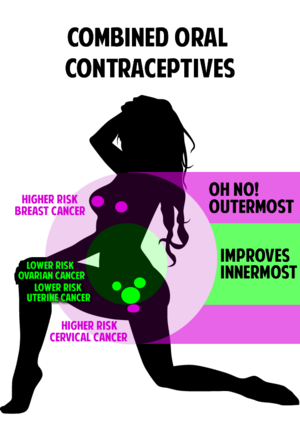 It can also (rarely) cause:

The easy way to remember which female cancers it can increase risk for is: Oral = Oh no! Oh no! Outermost, Improves Innermost:

How it works: Makes cervical mucus hostile to sperm, and inhibits ovulation in some women too.

How good is it: Slightly less good than the pill, it has a failure rate of around 1/100 women years. It is also poorly absorbed when people have gastric disturbance. Whilst early POPs had a small margin for error in the time that they needed taking, some of the more modern types allow a 12 hour window.

Problems: There are less side effects than the COC, but many women do notice spotting bleeding during the month, which can be a big problem to them.

How it works: Works the same way as the POP. Makes cervical mucus hostile to sperm, and inhibits ovulation in some women too. The depot injection needs to be renewed every 3 months, the implants every 3 years.

How good is it: The beauty is that it is always in so it can't be forgotten, and GI disturbance doesn't affect its absorption. Its failure rate, as long as people don't forget to have it renewed, is around 1/2000. This means its very effective.

Problems: Similar side effects to the POP. The biggest thing women complain of is 'spotting', or unexpected bleeding.

Barrier methods are well known, and the most common form of contraception. Unlike all other contraception, they protect against STDs, but they are less effective at preventing pregnancy. They also have no side effects, unless someone has a latex allergy...

Though effective, intrauterine devices are not as commonly used as other methods, mostly seen in older women, who the risk of pelvic inflammatory disease and infertility is no worry.

How it works: Copper prevents implantation, is bactericidal and spermicidal and basically stops pregnancy.

How good is it: They can be left inside and forgotten about. They last 5-10 years. They are very effective, with a failure rate of 1/200 women years.

Problems: They can cause PID. If pregnancy occurs, its more likely to be ectopic. Can cause very heavy periods. Can also (rarely) cause perforation of the uterus. I suspect this hurts.

How it works: These contain progesterone, and work in a similar way to the copper ones..

How good is it: They can be left inside and forgotten about. They last 5-10 years. They are very effective, with a failure rate of 1/200 women years.

Problems: Similar problems to the copper coil, such as PID . Less commonly cause heavy periods than the copper one.

There are many other forms of contraception, such as "family planning" and "the rhythm method". Most of them are highly unreliable: