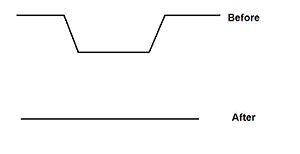 This shows a depressed line before and after treatment with an SSRI. Clearly an effective treatment for depression.

"Persistent low mood for over two weeks" is the common definition. But basically, the three big features are low mood, increased fatigueability (anergia) and loss of interest (anhedonia).

Approximately 15% of people will experience major depression once in their life.

No one really knows, despite what they may tell you. The most popular theory is that lack of serotonin in the hippocampus causes low mood. Anti-depressive drugs increase amounts of serotonin, uptake of it or reduce breakdown of the chemical. Thus you have more serotonin, and are happier. Probably.

There are two types of symptoms, biological and cognitive. Cognitive refers to the thoughts of the patient, whereas biological is not a very good classification, and basically means mood/physical.

7 or more, including core symptoms; severe

The only real way to diagnose depression is a complete psychiatric evaluation. In hospital this is usually done with various questionnaires, social history, previous notes and collaboration with MDT/family.

It is worth doing:

There are four main courses of management. In rough order, they are

1. Treat underlying cause (if there is one)

Mostly the case with hypothyroidism, you treat it with thyroxin goes away.

Other medications include SNRIs and MAOIs but are only used if the SSRIs and TCAs fail.

Main type is cognitive behavioural therapy. Basically, working with a psychotherapist to identify illogical or distorted thoughts and intentionally replace them with positive thoughts. Can be as effective as drugs, however very costly in human resources, and has a huge waiting list everywhere.

Very effective in extreme depression, and depression with other complications such as suicide, psychosis and severe self neglect. Main theory, again, is that electric shocks to the frontal lobe cause serotonin release. Maybe. Downsides; causes short term memory loss, and short acting - needs treatment at least once a week for continued therapeutic effect.

Without treatment, first episode will often remit within 6-12 months. However, will return in 60% of cases.

With treatment continuing for a period of a few months after remission of symptoms, chance of it recurring is about halved. However, after one depressive episode, average person is about 4 times more likely to have an attack of depression than a person with no history.