An eating disorder is a compulsion to change you eating habits in such a way that it adversely affects your physical or mental health. There are only really two eating disorders - anorexia nervosa and bulimia nervosa. 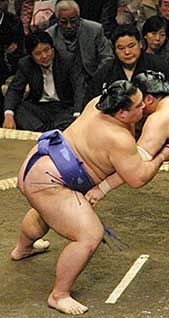 This man does not have anorexia

Anorexia nervosa is characterised by low body weight and poor body image with an overvalued idea of how much the patient weighs, resulting in obsessively trying to shed weight.

(NB: although the condition is colloquially referred to as 'anorexia', strictly speaking this simply means 'reduced appetite'.)

Genetics has a significant influence in predispostion, twin studies showing it is about 50% of the cause. There are also a variety of biological, psychological, social and cultural factors.

The primary diagnostic criteria are:

Treatment of anorexia nervosa is primarily psychological and supportive. Although there is little evidence that pharmocological therapies work, medication may be prescribed for comorbid conditions but care needs to taken as the poor physical state may be affect or be affected by medication.

CBT is the primary psychological therapy in anorexia treatment. Other therapies include interpersonal therapy and a variety of other talking therapies.

Roughly 0.5kg-1kg per week should be the aim (0.5kg outpatient). This requires between 3500 and 7000 extra calories a week. Regular physical monitoring is also required.

It has a prevalence of approximately 1-2% in the Western female population and is seen primarily in caucasians.

Precipitating factors include general stresses and pressures to conform.

Although the main features are binge-eating and subsequent vomiting, bulimia has a much wider clinical picture. The symptoms can be split into two main categories - psychological and physical.

These are primarily the complications of repeated vomiting:

Although it is a psychiatric disorder, understandably has physical consequences. As such, it's management is split into psychological, pharmacological and physical management.

SSRIs (generally fluoxetine) are the treatment of choice in bulimia and have been shown to reduce frequency of binges. Success will usually become apparently quickly.

This very important in people who abuse laxatives or vomit frequently. Fluid and electrolyte balance must be assessed. Although it should be avoided as a matter of course, if medical intervention is required, it should be given orally in the absence of contraindications.