The first thing to say about management of fertility problems is that if there is a cause, (e.g. PCOS) treat it. There are, four main treatments for infertility and they are outlined below.

Essentially, they put sperm directly into the uterus. Don't really know how else to describe it. If infertility is unexplained, due to low semen volume, otherwise rubbish sperm or a reaction between the cervical mucus and the sperm.

The oocytes are taken out of the ovary and then they do some magic to them. Well, they mix the recovered oocyte with sperm. After giving it all a good shake, the bag of fun that contains semen-ooctye mixture is transferred into one or both Fallopian tubes (the mixture rather than the bag - the latter would be incredibly painful). Slightly more complicated than IUI but it has different indications.

Can be used in unexplained infertility but also anovulation (obviously, you need to stimulate ovulation first), sperm-cervical mucus interaction or female autoimmune infertility.

There are five basic bits of IVF:

How many free attempts you get at IVF is dependent on which trust hospital you're in. After that, you have to pay. It's £1732 in Australia, apparently. If anybody could find out the rates in Iran, that'd be useful as there's a 100% chance it's on the syllabus. 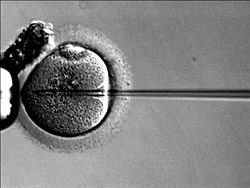 At the "fertilisation" stage of the IVF, a single sperm is directly injected into the ovum to produce an embryo. They're the cool pictures you see a lot, kind of like the one on the right. After his, IVF continues as outlined above.