Reflux is incredibly common, reflux being the main cause of heartburn. It can lead to oesophagitis or worse, Barrett's oesophagus which increases the risk of developing oesophageal carcinoma. 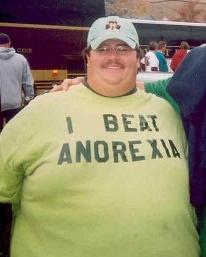 Whilst this man's successful struggle against anorexia is commendable, it may be suggested that's he's now overusing the digestive tract which he was born with.

Gastric ulcers are a common problem which can, these days, be treated medically. Gastric cancer has a very low survival rate because it presents late. Infections of the GI tract can cause gastroenteritis.

There aren't that many really:

are the most common. More rarely:

Like most of the bowel, you can get cancer. You can also get inflammatory bowel disease which is also a considerable lack of fun. Diverticulae are outpouchings of the bowel wall which alone do not cause problems but can become inflammed. Polyps are common as they can be signs of IBD or premalignant.

Angiodysplasia is most commonly found in the gut. If you miss appendicitis your patient will die and given it's a piece of urine to treat, you should problably learn about it. Finally, the diagnosis of exclusion that gives you irritable bowel syndrome or IBS is important to know about as it's incredibly common (and isn't just "all in their head").

Once again, it's worth mentioning cancer (half the reason people do rectal exams). You can also get haemorrhoids a.k.a. piles. And finally, prolapse is the last thing that really goes wrong in the rectum.

Perianal abscesses are not uncommon and if you want to tell a doctor your arsehole is itching but without being rude, just say "pruritis ani" and they'll get the point. 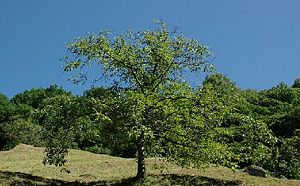 This is a tree. However, it is inefficient at transporting bile from the gallbladder and liver to the jejunum. If your biliary tree ceases to function, do no replace it with this Sweet Chestnut Tree.

One of the major causes of liver problems is everybody's favourite constitutional isomer of dimethyl ether, alcohol which unsurprisingly causes alcoholic liver disease. If you knacker your liver too much, whether through alcohol or other means, it starts to fail. Basically, livers start off as fatty liver, generally move onto cirrhosis. It's also worth knowing about primary biliary cirrhosis.

There are also the different types of hepatitis which is inflammation of the liver. One of the final set of conditions to know about are overdoses which affect the liver, the most common of which is paracetamol overdose.

One of the big problems with making bile is that you can form gallstones or calculi (sing. calculus) which is really rubbish and annoying. They can also cause inflammation of the gallbladder, aka cholecystitis, though this condition is common and can be caused by other things. This also needs to be differentiated with inflammation of the bile duct, known as cholangitis.

It goes like this - there's pancreatitis (acute and chronic) and there's pancreatic carcinoma. There's also diabetes but that's more to do with the endocrine rather than exocrine function of the pancreas. As such, it's generally managed by endocrinologists.