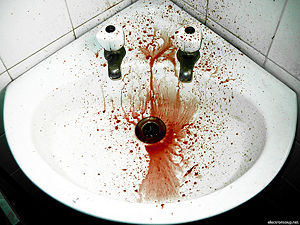 If this is what greets you in the morning, you probably need to go see a doctor. Thanks to flashman for the pic!

Medical Emergency - Haematemesis is an emergency. The key point is whether there is blood loss sufficient to cause shock.

Urgent, but not really that common. Often haemoptysis is mistaken for it.

Generally caused by something in the upper digestive tract bleeding.

The obvious one is vomiting up blood.

Accompanying this can be other GI symptoms such as nausea and vomiting. Blood in stool can happen too, with dark, tar like stools that smell awful.

Vomit that looks like coffee grounds, when you have, in fact, not swallowed coffee grounds, is a specific type of haematemesis. It shows the blood has been exposed to stomach acid, and turned brown. More dangerous and acute bleeding is more likely to be bright red.

Medical Emergency - All the below are either emergencies, or pretty urgent. Most need dealing with immediately to prevent shock!

The commonest cause of admission for haematemesis is use of NSAIDs, causing a bleeding stomach ulcer.

Not much blood lost