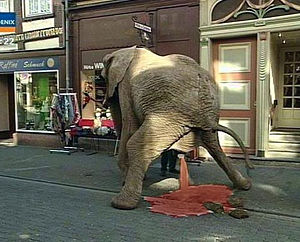 This elephant has haematuria. They also have polyuria, assuming that's defined as more than 3 litres in 24 hours in elephants as it in in humans. I assume it is.

Relatively common, especially in older people. Its a good predictor for serious disease - in one study of 50+ men, pathological conditions were found in 31 out of 44 who had haematuria at least once.

Its almost always a problem in the urinary tract. Blood is a massive molecule, so no matter how nackered the kidneys are, they won't let blood through. So the blood comes through somewhere between the kidney and the urethra.

One common confounding factor is menstrual blood. Often a woman in the middle of a period will get blood in their urine, from the vagina. This is not haematuria.

Commonly, alongside blood in the urine, they can get abdominal pain and dysuria (pain or difficulty urinating).

In some of the causes, such as urinary tract infection, you will get fever. In others like urological cancer, you will get weight loss.

Kick off with Urinalysis. This is mandatory to confirm there is actually blood in the urine.