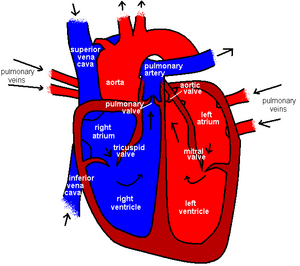 You should all know the routine by now. Honestly can't be bothered to write it down. The diagram on the right should give you a good enough idea, click on it if it's not big enough for you. I drew it – took ages, but it was more fun than revising so, you know, had to be done.

The normal heart contracts at around 70-90bpm in the normal resting adult. This rhythm originates spontaneously in the conducting system, and then moves to the parts of the heart. There is a delay between the impulse reaching the ventricles from the atria in order to allow the atria to empty their blood into the ventricles before the ventricles contract.

The left and right coronary arteries come off the aorta in the aortic sinus, the right one anteriorly, the left one posteriorly Three key points to learn: 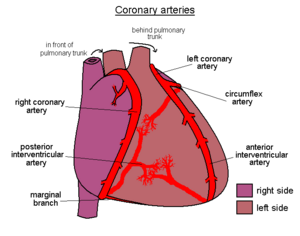 Most blood from the heart wall drains into the right atrium through the coronary sinus – this lies in the posterior atrioventricular groove. There are two main veins, the great cardiac vein (with the small and middle cardiac veins draining into it) and the anterior cardiac vein.

Comes off the vagus nerves

Does it have any? Probably not. 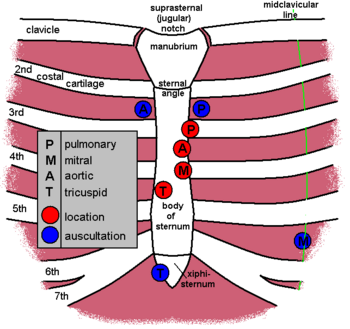 If you want more in-depth things on examination, try looking at cardiovascular examination.