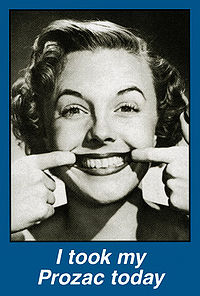 Psychiatry is the treatment of patients with poor mental health, as opposed to the rest of medicine, which focuses on physical health.

A key perspective is understanding that mental health must be assessed in the context of social norms and whether the perceived 'problem' is not just a part of somebody's personality. Intervention is only necessary when normal social function is being negatively affected.

In the UK, and a fair few other countries, classification is based on the ICD-10 framework. In the USA, they use DSM IV, which is similar to ICD in many respects. Both are a classification system for all disorders of health: under ICD-10, mental health disorders are in the F category[1].

There are 4 digits, with the last optional, so, for example:

There are four key areas of psychiatry: mood, schizophrenia, personality disorders and dementia. Whilst there are others, most of what you will deal with fall into these loose categories.

The commonest of these is depression. You will almost certainly know a friend, relative or patient that suffers from this. Defined by a triad of symptoms: low mood, loss of energy, loss of interest. Most commonly treated with SSRI antidepressants and/or cognitive behavioural therapy.

There are a variety of anxiety disorders, however the commonest is generalised anxiety disorder; defined as a state of anxiety present most of the time without appropriate stressors. Shares a lot in common with depression, also treated with SSRIs and CBT.

Bipolar disorder is a mood disorder with both ends of the spectrum; low mood and innappropriately high mood - mania. Patients will often swing between the two levels over periods of weeks. When manic, they will often have pressured speech and grandiose or paranoid delusions. Usually they are treated with an atypical antipsychotic and a mood stabilizer.

Schizophrenia is the classic "hearing voices", mad-as-a-bag-of-squirrels psychiatric condition. It is characterised with ABCD as:

Can be difficult to manage, but usually atypical antipsychotics work. In some cases of resistant conditions, clozapine is used. This needs monitoring, since it can cause agranulocytosis.

Unlike most of psychriatic disorders, personality disorders are rarely treatable with medication. They fall into three clusters, known informally as mad, bad and sad:

In the UK, an ever growing field, since we have an ageing population. The commonest dementia is Alzheimer's, although its worth knowing about vascular dementia and Lewy body dementia too. No real treatments, although some drugs can have some positive effects in increasing functioning.

Psychiatry affects people in all ages and walks of life. Commonly problems can occur in old age, pregnancy, childhood and amongst those abusing alcohol and other substances.