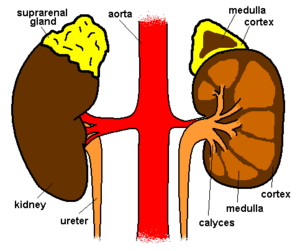 Each kidney has a dark brown outer cortex, and a light brown inner medulla. The cortex is around the edges, and between the medullary pyramids The medulla is composed of about a dozen renal pyramids (diagram only shows 7 for ease sake), with the base outwards and the point inwards. Each medullary pyramid is drained by a calyx, which drains into the ureter, and then passes to the bladder.

Contributes to homeostasis by:

Produces erythropoietin in response to O2 level, stimulating the production of more erythrocytes by the bone marrow. Also produces renin, but you might want to read more on that here

The renal artery arises from the aorta around L2, and divides into segmental, lobar then interlobar divisions.

Lateral aortic lymph nodes around the origin of the renal artery.

The renal cortex is where ALL the glomeruli are. These glomeruli are associated with proximal/distal tubules and some (cortical) collecting ducts. Therefore, if you have a slide with glomeruli, you MUST be in the cortex.

Histologically, you can also differentiate between proximal and distal tubules:

According to our lecture on this, from a histological point of view, we should be able to recognise cortex, medulla, collecting duct and glomerulus.

Will try to get slides for pictures on this.

Sorted by area of the kidney it affects:

Most renal disease is a result of hypertension, and so anyone with high blood pressure should always be considered for renal disease.

Basically, either atheroschlerosis, or congenital abnormality causes a reduced blood flow to the kidney, and thus ischaemia – so it can get damaged and so doesn't filter the blood properly.

Find out more on the renal artery stenosis page.

When organisms gain entry via the blood, infections can occur. They will often present with fever, loin pain, anorexia, or nothing at all. They are often the spark that ignites a glomerulonephritis bonfire.

Hereditary disease, that passes down through families. Lots of cysts form in the kidney, causing gradual enlargement of both kidneys, with an accompanying loss of function, and occasionally renal failure.

Benign tumours most commonly remain undiagnosed, and are found in as many as 20% of autopsies. Renal cell carcinoma is the most common, but is still pretty rare. Generally presents with haematuria, loin pain and a mass, and the prognosis is pretty rubbish, generally below 20% 5 year survival.

The kidneys are well protected by the lower ribs, the lumbar muscles and the vertebral column. Severe blunt injury applied to the abdomen can cause major damage, which since 25% of cardiac output runs to the kidneys, can result in rapid blood loss.

Basically, this is an umbrella for a wide, wide range of similar diseases. Mostly autoimmune, they usually get kicked off by an infection in the kidney, leading to inflammation and the body starting to attack the kidney cells itself. There are non immunological causes too, though less often.

Once the kidneys stop working, renal replacement must start, through either dialysis or transplantation.

Either haemodialysis or peritoneal dialysis. Haem needs patients to come in most days for treatment, for several hours, thus massively limiting range and freedom. Peritoneal is carried around, giving freedom, but is slightly less effective than haem, and has a risk of peritonitis and infection.

The iliac fossa is most commonly used for renal transplant. The original kidneys are left in situ, unless they are bleeding or causing persistent pain. The ureter is fed into the bladder, but because it lacks the valve of the other ureters, reflux is more common, making them much more at risk of UTI. However, nearly all patients much prefer this to dialysis.