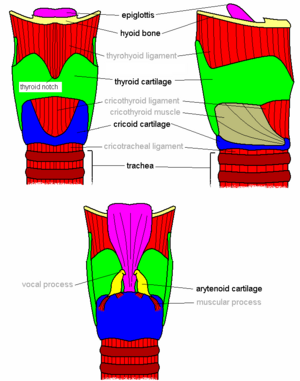 The larynx starts where the epiglottis meets the pharynx, and ends at the top of the trachea. In front of it are the thyroid and parathyroid glands. It is composed of several irregularly shaped cartilages:

The muscles of the larynx are in two groups, extrinsic and intrinsic:

The sensory supply to the mucous membrane above the two vocal folds is from superior laryngeal branch of the vagus. Below the folds it is supplied by the recurrent laryngeal nerve.

The motor supply to the intrinsic muscles is the recurrent laryngeal nerve, except the cricothyroid muscle, superior laryngeal.

Not very much lymph, which is good since it prevents cancer spread.

Like most of the respiratory tract, its mostly non-keratinized ciliated columnar epithelium.

Any operation on the thyroid can risk damage to the recurrent and external laryngeal nerves. This is generally a bad idea. The nerves may be affected by malignant involvement of the deep cervical nodes also.

Inflammation of the larynx and/or vocal cords. It may occur in association with viral or bacterial inflammation of trachea and bronchi. Diptheria was once a common and serious bacterial cause of laryngitis, forming a fibrinopurulent (fibrous with pus in it) membrane that obstructed airways. If associated with an allergen there can be gross oedema causing airway obstruction. Breathing can be difficult, voice may be horse and there is a honking cough.

Inflammation of the epiglottis. The child will be obviously unwell since it will be from a systemic infection, spreading to the epiglottis. Happily its rare since the HIb vaccine began, since its caused by haemophilus influenzae type B. It can lead to airway obstruction and sometime a tracheostomy may be necessary.

The key and important thing to remember' is: if you suspect epiglottitis, do not go anywhere near the child's throat until you have an anaesthetist nearby. Otherwise it can close up and the child can die. Something to avoid...

Often referred to as singer's nodes. Connective tissue with squamous mucosa forming on the vocal cords. Even when only a few millimetres in diameter they can alter the character of the voice.

Caused by human papillomavirus. They are benign tumours or papillomatous squamous epithelium with fibrovascular cores of stroma. They may be multiple and recurrent, especially in children, by are usually single in adults. They can extend into the trachea and bronchi. Have to be removed surgically, but they often come back.

Usually preceded with a degree of dysplasia. You get it if a) you sit in your shed sawing up asbestos ceiling tiles and gleefully inhaling the dust, or b) you choose to suck on rolled up burning carcinogenic leafs 20 times a day. Most carcinomas arise on the vocal cords. Symptoms are hoarseness of voice and later, pain, haemoptysis and dysphagia. Treatment is by resection and/or radiotherapy.