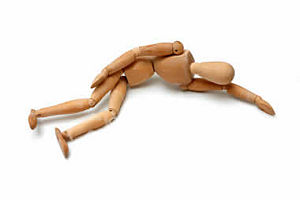 This manikin does not respond to stimuli, and thus must be unconscious, in a coma, or perhaps dead.

A loss of being conscious, the state of being aware and mentally able to respond to stimuli.

So if you are asleep and someone pokes you, you wake up, responding to stimuli and thus not being unconscious. If you are in a coma, you won't wake up, and are thus unconscious.

Unconsciousness lasts for minutes, up to hours. Coma lasts for days, up to years.

Medical Emergency - New onset coma is something that needs to be investigated. If in doubt, you should check blood glucose, and if its a hypoglycaemic diabetic, give them 50mL of 50% dextrose immediately!

An estimated 15% of emergency admissions are from conciousness issues.

There is a huge range of causes. The most common cause is syncope, which is a harmless faint.

The best way to explain the others is to split them up by symptoms, and show common conditions: