From MedRevise
(Redirected from Menopause)
Jump to navigation Jump to search

There is a difference between the colloquial terms surrounding the menopause and the medical ones can be very different. Hence, this section:

There are a limited number of follicles in the ovary and when the numbers start to dwindle, ovulation and thus menstruation begin to become erratic as oestrogen levels start to fall. Some of the initial symptoms of menopause may start to show through. Eventually, oestrogen levels fall because there are no follicles to produce it, stopping the negative feedback which keeps FSH and LH levels down. Thus their levels go up.

There is also an increased risk of vascular problems, particularly cardiac and cerebrovascular disease. After menopause, the risk of a stroke or MI increases to the equivalent level for a man. They are uncommon in premenopausal women.

LH and FSH levels are unreliable as they fluctuate in the climacteric. Mammography is advised 3-yearly after menopause. and bone density assessment is required in women at-risk of osteoporosis which involves a variety of imaging.

This shouldn't be given out to everybody. Essentially, it's risk vs. benefits including how the women feels. If she's not being affected by the menopause and she isn't at particularly high-risk of anything, HRT is unnecessary. And the same applies the other way. Of women prescribed HRT, <50% continue after a year. 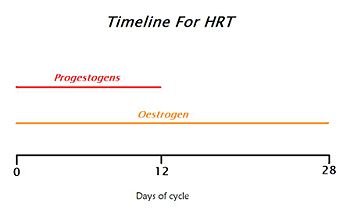 This is the timeline for oral preparations of HRT.

HRT consists of a combination of oestrogen and progestogens. Oestrogen is the main hormone you're trying to replace but "unopposed oestrogen" increases risk of endometrial carcinoma. Hence, progestogens are also given as part of the preparation unless the woman has had a hysterectomy.

Oral preparations involve taking 28 days of oestrogen and 12 days of progestogens. A withdrawal bleed will occur at 12 days after stopping the progestogens. This 28-day cycle is repeated until HRT is stopped.

Implants can be inserted subcutaneously into the abdominal wall under local anasthetic. This will last up to a year but the patient still needs progestogens if she still has her uterus. Testosterone can be given via implant to improve libido.

Other alternatives are: transdermal patches containing oestrogen; daily gel which is rubbed into the skin; and finally nasal sprays and vaginal rings. Progestogens (needed in an intact uterus) can be given by patches as well.