From MedRevise
(Redirected from Murmur)
Jump to navigation Jump to search 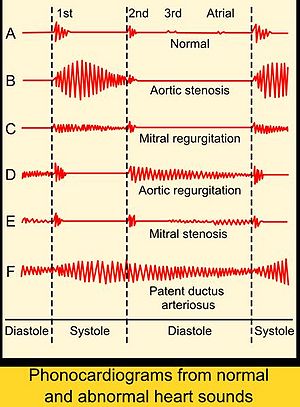 Yep. You'll listen to somebody's chest. The cardiologist will ask you what the murmur is. You'll guess. You'll get it wrong. You'll feel bad. This won't really help you but at least if you say one of the following phrases, you won't feel like a complete tool. The four basic murmurs:

We'll get on those in a second. Firstly, we need to cover something more basic.

They associate with the eight different valve abnormalities. Mostly, these abnormalities are found on the left but the same sounds can be transposed to the left. Hopefully, if you're reading this you know there are normally two heart sounds. (Have a look at the diagram on the right.)

The first heart sound (S1) is that of the mitral valve closing which happens as the ventricle contracts (ventricular systole). This stops blood going into the atrium. Shortly after that, the aortic valve opens allowing blood to get into the aorta. Once the ventricle stops contracting, the pressure in the ventricle's low so aortic blood starts to try and move back into the ventricle.

The second heart sound (S2) is that of the aortic valve closing which stops blood going back into the ventricle. After this, the mitral valve opens as the atrium contracts. Let's try and put this all into a simple order:

These are murmurs that occur during systole and after S1, before S2. Essentially, they're caused whilst the ventricle is contracting which means the blood either goes: into the aorta through aortic valve; or back into the atrium through the mitral valve.

The best way to confirm a murmur as systolic is to feel the pulse whilst auscultating. If the murmur is heard in time with the pulse, it is systolic.

Mitral regurgitation is a pansystolic murmur (throughout systole). Hopefully, the diagram on the right gives you an idea or what it's like. As soon as the ventricles start to contract, the incompetent mitral valve gives way and blood starts to go into the atrium. As this happens throughout contraction, you get a murmur throughout systole. It is described as a "blowing sound" (say this to impress consultants). Occasionally, there is a third heart sound (S3) caused by atrial overload, resulting in pathological dilatation of the ventricles. This is, in theory, what causes the third heart sound. Well, in theory...

Aortic stenosis is an ejection systolic murmur. This is a murmur that rises and then falls through systole, as the diagram on the right suggests (if it's come out properly). It is described as a "loud, rumbling" murmur (say this to impress consultants), like a lorry going past. Sort of. It kind of sounded like that to me.

With regards to the pulse, if the murmur is not in time with the pulse, it is likely diastolic.

Mitral stenosis is a mid-diastolic murmur.