Neonatal medicine concerns babies shortly after they have been born. Relatively speaking, neonatal mortality is a good indicator of the development of a nation as the developed world tends to have incredibly low rates. With the modern technology available in the UK, mortality in babies under 1.5kg has dropped from just under 700 in 1953 to about 200 (per 1000 live births) in 1998. Bo selecta! 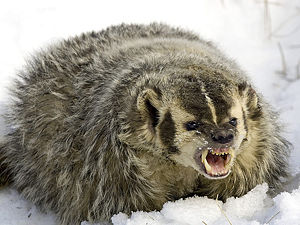 The beautiful badger is one of nature's finest specimens. Sadly, they are rarely seen on SCBU, or in fact, rarely noted within any paediatric unit. This makes seeing a rare one, perhaps munching away at a toffee apple behind an incubator, all the more rewarding.

This deals with problems resulting from issues during pregnancy which affect the child directly afterwards. This includes maternal illness affecting the foetus and congenital infections.

As soon as the baby is born, you also need to know how to do a new baby check.

If you get a seriously ill child, you need to know about stabilising neonates. This will commonly happen after birth problems, such as asphyxia or injury.

Before you worry about babies and illness, really you should know about neonatal examination. Prematurity brings up a wide range of problems, most notably respiratory distress syndrome, although there are respiratory, physiological and other problems too.

Other common complaints include: