Classified by size of red blood cell found in samples taken from the patient. So you get three types, microcytic (small cells), normocytic (normal cells) and macrocytic (big cells)

This is the most common cause of microcytic anaemia. Babies are more at risk than adults of this, because as baby needs almost as much daily iron as an man, but eats much much less. Thus, having low iron food can have a rapid effect.

Commonly this can happen from substitution of breast milk for cow’s milk without adding formula. Cow’s milk has a 5th of the iron of breast. For the weaned child, having low iron foods can be the cause. Give advice about this to vegetarian parents.

A symptom of iron defiency anaemia is pica, which is eating non food stuffs, like soil, gravel, umbrellas and small buildings. This is something toddlers do, presumeably trying to get iron from stuff. Worth asking about in the history though! 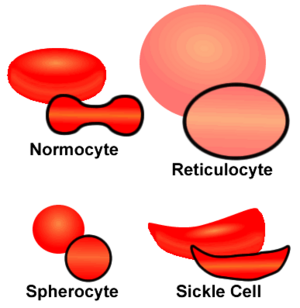 First here is the normocyte, or a normal blood cell. Nice, eh? Next is the reticulocyte, seen in haemolysis. Next up is the spherocyte, which, as is the key cause of hereditary haemolysis. Finally is the sickle cell, which is seen in sickle cell disease, unsurprisingly.

Various types, but the severe version, β-thalassaemia major causes jaundice and anaemia from 6 months of age. There will be liver and spleen enlargement also. Without regular blood transfusions this condition is fatal. In the milder versions, its less of a problem, but always have it in the back of your mind, since it can be mistaken for iron deficiency anaemia.

This is a hereditary condition, where there are two manifestations. In hetrogynomy### (HbS) the child will be unlikely to present, and will have some protection against malaria. In homozygous### (HbSS) sickle cell inheritance, the child will have malformed haemoglobin, with a reduced red cell lifespan, and more risk of clots.

This is a risk of anaemia in HbSS, due to haemolysis of the weird shaped cells. There is also common occurrences of episodes of pain, generally in the peripheries. However there can be necrosis of any organ or body part, due to clots from the rubbish cells!

For kids, the big worry is for pneumoccal infection, due to the spleen breaking down. Thus penicillin should be taken throughout life. Although 85% of people with the full disease live past 20, most of the 15% die under the age of 3, due to infection.

Basically, this is anaemia where red cells are not being made. In paediatrics, you will most commonly see it in leukaemia patients in remission, who have had treatment that has knocked out the bone marrow.

Treatment, short term, is transfusion. Without this, the patients will die. Long term, bone marrow transplant is the best cure. Or, in cases where the bone marrow is being inappropriately attacked by the immune system, treatment with immune suppression.

Aside from Sickle Cell, and Thalassaemia, the main haemolytic anaemia is the memorably named Glucose-6-phosphate dehydrogenase deficiency. Its very common (100 million+ worldwide), although most are not badly affected.

In males, or homozygous/lyonised females, it causes episodes of haemolysis. This is most commonly seen, in paediatrics, with neonatal jaundice. In that it needs to be treated with transfusion.

Stuff like hypopituitarism, and paediatric thryoid disorders can cause anaemia, so worry about these if everything else fails.

Haemolysis due to another cause, such as auto-immune disease, can cause macrocytic anaemia, because the bone marrow goes into production overload, releasing red cells that aren't fully matured (reticulocytes), and are big and blobby. Sadly, such young cells are also rubbish at holding oxygen, so its not ideal.

Pernicious anaemia is an anaemia caused by malabsorption of Vitamin B12 due to non production of intrinsic factor from the parietal cells in the stomach. It is pretty rare in childhood. The most common B12 deficiency comes from Crohn's disease, or anything that messes up the end of the ileum.

Often presents with fatigue, numbness, and if it gets bad, an ataxic gait. Treatment is by increasing the amount of B12 in the diet, intravenous B12 and treatment of the underlying cause.