In paediatrics, cardiology is very different from adult cardiology. 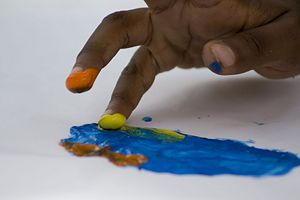 Rubbish art like this is often seen on children's wards. Apparently it makes children recover from having a quadruple bypass more quickly. If so, there should be dramatically reduced fatalies in the area around the Tate Modern. If the effect on health is proportional to the rubbishness of the art, there are probably miraculous healings near Tracy Emin's house!

In adults, its generally an old age acquired problem, due to atherosclerosis and the like; in kids it is mostly congenital. Apart from rheumatic heart disease, everything you will see will be congenital heart malformations.

The functioning of the heart changes rapidly at the point of birth. This happens due to the closing of the foramen ovale, which is an important pyhsiological stage to check out. The ductus arteriosus also closes early in life, which combined with the above completes the change of the baby's circulation from the foetal circulation. Along with the problems there can be with this process, it is worth reading about congenital heart defects, such as Ventricular Septal Defects and the Tetralogy of Fallot.

The other key aspect of paediatric cardiology is recognising when an infant is in heart failure, and treating it. This is covered in the page on paediatric heart failure.

There is one main area in paediatric haemotoloy. It is a common red flag - anaemia. There are many causes for this in the young, and it can be an important marker for haemolysis. It can also be caused by bleeding, which in adults can be from cancer, but in children it is much more commonly due to bleeding disorders, such as haemophilia.