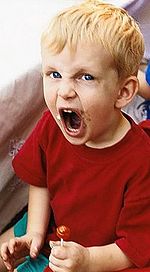 This child is not suffering from a behavioural disorder, he apparently just dislikes his extra hot chilli lollipop.

Generally, when medical students study psychiatry, they don't do a lot on children because that comes under the specific Child and Adolescent service.

Although it is feasible to have children with common adult problems such as schizophrenia and depression, psychiatric disorders in kids usually come under the general title of behavioural issues:

It begins with A

The two most common disorders are autism and ADHD.

There are a huge range[1] of other child and adolescent psychiatric problems including:

They are unlikely to come up in medical finals, or in any career not involving a big chunk of psych, so we are not going to go into a lot of information on them.