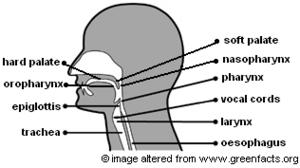 The pharnyx is basically the joining of the nose and mouth (nasopharynx and oropharynx). It contains the hard palate (roof of the mouth) formed by the palatine bones, and the bottom of the maxillae. The soft palate is basically the uvula.

Mechanism of swallow is controlled by a swallowing centre in the medulla oblongata and pons. Its initiated by touch receptors in the pharynx as a bolus of food reaches the back of the throat. This is what happens.

Mostly from the maxillary nerve, with the glossopharyngeal nerve supplying the soft palate.

About: Weakness of the lower cranial nerves, usually caused by motor neurone disease, or demylenating conditions. Can be caused by surgery for acoustic neuroma, or radiotherapy for nasoharyngeal carcinomas.

Symptoms: Dysphagia, drooling, pooling of saliva in the pharynx and "a wasted fasciculating tongue". I think that means involuntary twitching.

About: Similar to bulbar, but the neurone defect is in the voluntary fibres. It is bilateral – and is sometimes seen following a capsular stroke – but because the cortico-bulbar fibres have bilateral innervations, sever only happen after bilateral infarcts.

Symptoms: The tongue is contracted and spastic – very different from bulbar.

About: It's a diverticulum of the wall of the pharynx at "Killian's dehiscence", which is a triangle between the cricopharyngeous and inferior constrictor, which has no muscles behind it so it is weaker. At first the pouch is posterior, but ends up on one side (often left), where it shoves over the oesophagus.

Investigations: Barium Swallow. Do not endoscope, as it is fragile and can rupture.

Basically I think it's a sort of lesion in the throat. Its pretty rare, and I couldn't find anything about it on the whole internet.

About: Overproduction of collagen by cells, causing stiffening, lesions, infection etc. Can be localised on skin, or more widespread and systemic (which is pretty awful).