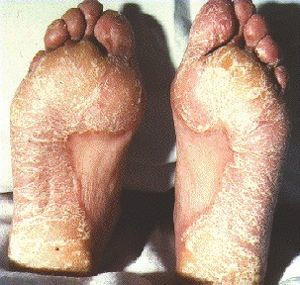 This is why being a hobbit isn't always great.

A scaly and inflammatory rash caused by hyperproliferation of keratinocytes.

Affects both sexes pretty much equally and has a prevalence of around 2% in the UK population. It peaks at 15-20 and 55-60.

There is some genetic link: you have a 1 in 10 risk with one parent with the disease, and 1 in 2 if both do.

65% have a mild form of disease, but around 7% of patients get a seronegative arthropathy

THere are two mechanisms; the first is hyperproliferation of keratinocytes in response to cytokines. These form what are referred to as psoriatic plaques. The time it takes for epidermal cells to move through the epidermis (transit time) changes from 30 days to about 2-3 days. The epidermis becomes 3-5 times thicker than usual (acanthosis); and starts to form "rete" ridges (arrowheads). This layer thickens further forming the stratum corneum".

The second mechanism is inflammatory infiltration. There is more intracellular adhesion in the epidermis and it is infiltrated by neutrophils and lymphocytes. You can get (Munro's) microabscesses in the stratum corneum. Finally, you get dilated, tortuous capillaries in the outer dermal layer. When scales are removed it causes pin-point bleeding called Auspitz sign.

Psoriatic plaques are red plaques, itchy with silvery scales. It classically occurs on extensor surfaces of elbows, knees, plus scalp and sacrum.

Flexures are frequently affected - axillae, groin, submammary, umbilicus - though they are usually not scaly. Smaller plaques (guttae of guttate psoriasis) are often seen in children.

Psoriasis can develop into psoriatic arthropathy in about 7%.

Some people can have an erythrodermic psoriasis episode - can cause severe systemic illness (fever, raised WCC, dehydration). Can be due to steroid withdrawal. Lose ability to control temperature, etc. Need to be admitted.

Topical treatments are messy, and difficult to use well, and work slowly.

Light treatments help around 80% of patients, but it requires attendance 3 times a week for 8 weeks. Most relapse within 6 months.

There are some biologics medications, which are very expensive, and still in testing - but currently working in 60% of patients who it didn't work for.

The general aim is to reduce the disease to about 10% as bad as it was to start. The patients would like 0%. They will be disappointed, general.