In order to diagnose this, you need to do an arterial blood gas 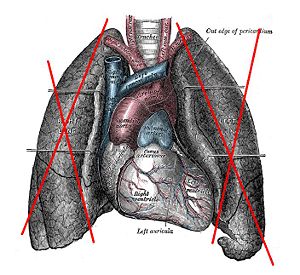 The bits that aren't working properly in respiratory failure have been crossed out. They're known as lungs. They be needin' a' mendin'!

PaO2<8kPa. There are two types which are defined based on the PaCO2.

PaCO2 is normal or low. Basically, hypoxia without hypercapnia (low oxygen, not high carbon dioxide). It doesn't matter if the CO2 is low or normal - if it's not high and the patient is hypoxic, it's type I respiratory failure.

Since both of these are caused by common disease like asthma and COPD, they're dead common. Learn about them!

If this picture doesn't help you differentiate between the two types of respiratory failure, I don't know what will.

Type I is caused by anything which results in a ventilation/perfusion (V/Q) mismatch. In normal ventilation the amount of air coming into the lungs (ventilation) is just enough to oxygenate the amount of blood coming into the lungs (perfusion). In V/Q mismatch, that ratio is out of whack causing the body to breath more quickly to make up for it. Causes include: pneumonia, pulmonary oedema, PE, asthma, emphysema, fibrosing alveolitis and ARDS

As for type II, there are a bunch of theories on how this works. The theory of hypoxic drive (where oxygen becomes the primary stimulus for breathing) has become more controversial recently. So in terms of pathophysiology, it's a bit difficult to be sure what's right or not. If nothing else, remember the "hypoxia with hypercapnia (PaCO2 > 6kPa)" bit and nothing else. It's basically anything with respiratory failure where they are hypoventilating (breathing too slowly). Causes include:

Having any of the diseases listed above, really.

Essentially, they can be split into those caused by hypoxia and those causes by hypercapnia.
Hypoxia will present with: dyspnoea, restlessness, agitation, confusion and central cyanosis. Longstanding, it will give polycythaemia, pulmonary hypertension and cor pulmonale.

Treat underlying cause. Whether it's type I or type II, you need to figure out what's causing it and deal with it.

Type I - give oxygen (35-60%) and assisted ventilation if PaO2<8kPa. You are looking to get oxygen saturation up (92-96% depending on age).
Type II - controlled oxygen (24%). You also need to recheck ABG after 20 mins. If the PaCO2 remains the same or gets lower, increase O2 to 28%. If the PaCO2 continues to fall consider assisted ventilation or a respiratory stimulant (doxapram 1.5-4mg IVI). If all this fails, intubate and ventilate.