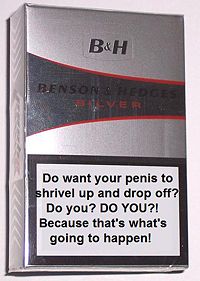 In a word: cancer.

Smoking is good for you

In the good old days, many people used to think smoking was good for you. Along with many things, such as asbestos making a rather nice alternative to wallpaper, ethnic cleansing and being Welsh, it has now been shown that these rather old fashioned ideas are not healthy, rather bad for society and generally a bad idea.

Whilst smoking does make you look cool, so does wearing jeans manufactured in sweatshops by children in far away countries, paid a pittance for working 16 hour days... - and think what a state the world would be in if we all started doing that?!

Smoking and being annoying

A man (called Dwain) was out with his dog for the day. A stranger asked him to hold his cigarette whilst doing up his shoelace and, being curious, Dwain took a drag. As this was the first time he'd ever smoked, he started to cough and in his fit dropped the cigarette on the floor. Unfortunately, the stranger was reknowned gangster and racketeer, Carlos The Clubber (so-called because of his penchant for clubbing seals, people who crossed him and going to nightclubs. Often to club seals). This was not going to be the easiest day of Dwain's life.

Carlos was now very angry. He had been trying to decide whether to propose to his wife or not and how he was really angry and found that, without a cigarette, he could not easily come to a decision. He could feel the anger welling up inside and his hand went down his trousers (not like that) and towards his big wooden weapon (not like that). Besides smoking, the only other way to vent his anger was by clubbing seals. Of course, there were no seals on Crookes High Street (by the way, they were on Crookes High Street) - just Dwain's dog, Nehemiah.

Despite Dwain's protestations, Carlos started to club Nehemiah to death. Dwain was unhappy at this but unsure what to do since the dog didn't actually belong to him but his friend and gangster boss Vinnie Jones-look-a-like (who ironically more resembled current Spanish premier Jose Zapatero). Dwain brought the corpse of Jones-look-a-like's dog, Nehemiah, to his door and Jones-look-a-like filled with rage and decided to engage in gang warfare with Carlos the Clubber.

The results was over 4 million deaths in Crookes and the surrounding areas of Sheffield due to this gang war. Jones-look-a-like and his son, Jones-look-a-like the 2nd won the war and forced all citizens of Crookes to forever revere Nehemiah whose death lead to the cleansing of Carlos the Clubber and his Clubs (the name of his gang) from Crookes.

The moral of this story is - don't smoke unless you like gang wars that cause over 4 million deaths.

Which of the lungs below are a normal pair of healthy lungs, and which are the scabby, scarred and tarred lungs of an idiotic, bonfire inhaling, life hating, foul smelling moron? (Clue: normal lungs don't look like they've been deep fried...) 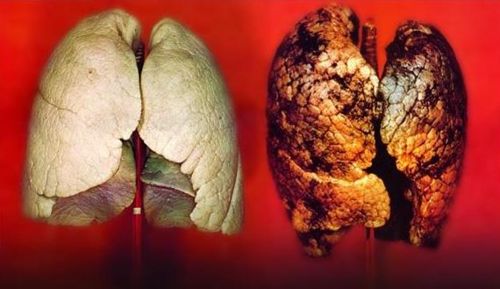