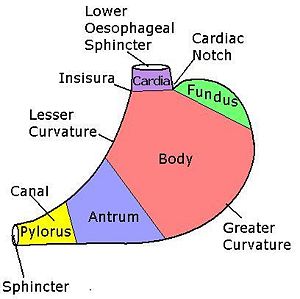 Basically a sac that can expand and shrink a bit (because of the rugae, folds in the stomach walls). It has two sphincters, the gastro-oesophageal and the pyloric (which is just made out of thickening of the circular muscle layer).

There are enzyme and HCl secreting cells, as well as mucus secreting ones. 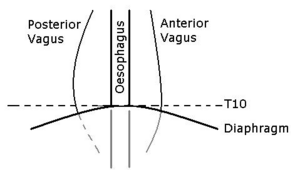 Left gastric nodes: Drain the lesser curvature and 2/3 of the body. Pancreaticosplenic, gastroepiploic and pyloric nodes: Rest of stomach.

Both plexi above are parasympathetic

About: Hits mostly in first born boys at 4-6/52. It is due to hypertrophy of the pyloric sphincter.

Presentation:True projectile vomiting of milk (undigested). Child will be dehydrated, hungry and dry. You should be able to palpate an "olive".

Investigations: Test feed, ultrasound, bloods will be low in K+ and CL- (Hypochloraemic and hypokalaemic – this must be treated before surgery with IV fluids, etc)

Treatment: Cut through the pyloric sphincter muscles {+nearly +} to lumen.

Alkali stuff from the duodenum is refluxed into the duodenum, as a result of stomach operation, or defective response to CCK, and/or secretin, which increase pyloric tone.

A diagnostic dead end – we don't know what's wrong, so you have dyspepsia (indigestion). Treatment with placebos is surprisingly effective (upto 60%!).

Epithelial/endothelial damage without inflammation. All the usual suspects, alcohol, smoking, drugs, aspirin and other NSAIDs and H. Pylori. Can lead to ulcers and cancer. Treatment by removing the antagonist.

About: Gram negative (pink) bacteria (spiral). Converts urea to NH3, causing the stomach pH > 7. Cause of both types of ulcer. HP attacks epithelial cells provoking an inflammatory response, which is ineffective against the HP. Duodenal ones are caused when a particular type of HP, just in the antrum, causes the parietal cells the make loads of HCl, which hits the duodenum with a bang.

Treatment: Proton Pump Inhibitor (means less H+ is pumped out of the stomach, increasing the pH) and 2 antibiotics

NSAIDs cause exfoliation (take off the top layer) of surface epithelium. As a result mucus secretion is reduced, so the stomach is eroded (partial loss of mucosa) and develops ulcers (erosion below the muscularis mucosa). Non Steroid Anti Inflammatory Drugs can perversely cause irritation and inflammation to the stomach lining. They are commonly taken by old ladies treating their arthritis, so beware of them. They need to stop taking the NSAIDs and use a replacement, or less damaging variety.

Treatment: Normally chemo and radio to try and make it operable. Because the lymphatic vessels of the mucosa and submucosa are linked across the stomach, cancer often mestatises. Because of this, it is very often treated with a total gastrectomy, which includes the bottom part of the oesophagus and first part of the duodenum. The oesophagus is left linked straight to the duodenum.

The antrum, where the gastrin is secreted is often the home of these. They occur in the alkaline producing mucosa, usually on, or close to the lesser curvature. The regurgitated duodenal contents/alkali from HP strip away the mucus, which exposes the epithelial cells to be attacked by acid, which creates a cumulative increase in mucosal permeability – once its started, it gets easier. Usually when mucus and epithelial cells get attacked – %color=#ff0000 %rarely from too much acid%%.

Bad stuff that can happen: