From MedRevise
(Redirected from Ureters)
Jump to navigation Jump to search

A muscular tube, running from the hilum of the kidney to the posterior surface of the bladder. Enters the pelvis, following the route of the iliac artery, until the region of the ischial spine (I don't know what that is). It is similar to the oesophagus – in that it is 10 inches long, and has three constrictions – at the kidney pelvis (hilum), at the pelvic bridge (the hipbone) and at the entrance to the bladder. When stones get stuck, it is usually at one of these places.

Urine is propelled from the kidneys to the bladder by peristalsis. 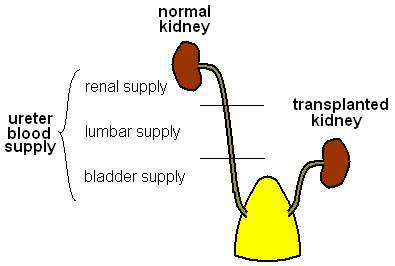 This means that when kidneys are transplanted, they have a shorter ureter, to save having to plug in two sets of arteries and veins.

Basically, the valve at the bottom of the ureter doesn't work properly, so on passing urine, liquid flows back up the ureter, putting the kidney under pressure, causing damage. It usually resolves happily in infants.

It can cause pyelonephritis, when organisms from the bladder reflux to the kidneys. It will often present with fever, loin pain, or nothing at all, but with a valvar abnormality, with often become chronic pyelonephritis, which generally leads to renal failure in <20 years.

Obstruction of the ureter

The ureter is blocked. This leads to a big build up of pressure in the kidney, so has to be dealt with sharpish, or permanent damage can get caused.

It can either happen with renal stones, or congenitally, although often, in both, the best remedy is surgery. Renal colic is said to be rather nasty, and can caused pain around the areas supplied by the afferent nerves.

When a stone gets lodged at one of the three ureteric constrictions. Strong peristaltic waves of contraction pass down the ureter to try and shift it. The spasm causes an acute colicky pain in the flank, loin and groin– which clinically is noticeable because:

a) there are pretty much no other symptoms, and
b) it isn't relieved by anything