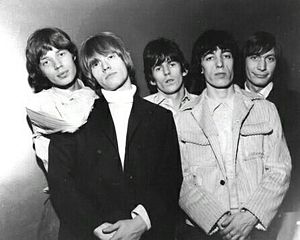 These are the Rolling Stones who are not the same as Renal Stones. Both are medically interesting. The former is unlikely to come up in your exams. (Unless you're studying The Rolling Stones).

Stone in the urinary tract. Anywhere. Even the willy.

Has a prevalence of 3% in the UK but a staggering, a shocking, a mind-blowing like you just found your Mum is a real life Jack Bauer, 12% in the USA. I'm probably labouring the point a bit. M:F, 2.5:1 and has a bi-modal peak distribution with peaks at mid-20s and mid-50s though the later peak is mostly due to infections in women. 40% pass spontaneously though incidence of upper tract stones is increasing. Upper tract is more common in the developed world. 80% are unilateral.

Stones can be made out of lots of stuff. They are created when there's a high amount of said stuff in the urine. So if the stone is made of calcium, that is more likely in somebody who has a large amount of calcium in the urine. It's called supersaturation. However, sometimes stones just form and nobody's sure why.

There three category of risk factor with specific ones within each category:

The clincal features depend very much on whereabouts the stone is. It's worth remembering that about 80% of stones are asymptomatic. Stones can present in any number of extremes from an incidental finding on an X-ray to bilateral hydronephosis and renal failure.

The primary symptoms are: flank pain which spreads round the abdomen as the stone moves down; haematuria which is common and can be both microscopic and macroscopic; and infection which will cause loin tenderness, pyrexia and sepsis.

Generally, colic (from flank through to scrotum/labia minorum), haematuria and infection. Tenderness along the renal angle or along the line of the ureter.

Men may also have prostatic enlargement whilst women may have a palpable stone on bimanual examination.

The initial tests are to confirm the presence of a stone (or calculus) and the later tests inform more about management and what exactly you're going to do. Obviously, if the initial tests rule out stones, then don't start chopping them open to get them out.

Essentially, this can be managed conservatively or it can be managed by surgery. There are some criteria for admission from primary care: failure to respond to analgesia within an hour; abrupt recurrence of pain; fever; systemic illness; infection; anuria (not weeing); non-functioning or solitary kidney; inability to take on fluids/nausea and vomiting; pregnancy; non-medical difficulty with the patient (can't phone, can't arrange an early referral, poor social support).

Basically, if there's no evidence of obstruction or infection then they can probably treated at home with instructions to come back if symptoms don't go away or recur. The treatments are:

You should also give fluids but not too much otherwise this causes problems with the ureters and kidneys (can cause damage to the nephrons due to high pressures).

Open procedures are very rare for stone removal. There are a whole host of methods available: