It's a muscular tube that extands from the vulva to the cervix, a muscular ring at the base of the uterus. It's about 3 inches long, which is a little worrying, since the erect penis is about 6, so presumably the penis corrugates or something like that.

This is the external part of the female genitalia. It has several layers worth knowing about:

The female equivalent of the penis – it even contains erectile tissue! Looks a little bit like a small willy, with the head, also called the glans, and the shaft connecting it above. Attached either side is the v-shaped corpus cavernosum, which contains nerve fibres believed to be involved in orgasm. The clitoris can be covered by a fold of skin called the clitoral hood. 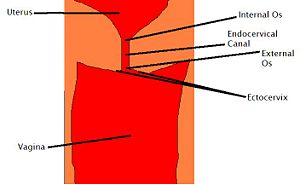 The World's Most Accurate Diagram Of The Anatomy Of The Cervix

The diagram shows the bits of the cervix that are important. Hopefully, the internal and external os are fairly self-explanatory - they're the holes at each end of the cervix, the former going into the uterus, the latter the vagina. The endocervical canal is essentially the bit in the middle between the ora (plural of os - weird, eh). The ectocervix is the bit of the cervix which projects into the vagina.

So, as a general guide, vaginal warts? STD.

Cancer of the vulva

Squamous carcinoma is relatively rare, but quite serious. Even mildly invasive forms tend to have lymph node involvement, which is attached to a poor prognosis.

Non-specific inflammation of the cervix is common, especially with presence of an intrauterine device. Can also be caused by Chlamydia.