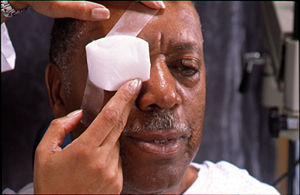 "Eye patch" is a common cause of unilateral visual loss. Check your patient is not wearing an "eye patch" before examining. If you manage to remove it, you may cure the condition.

Visual loss is generally split up, at least with regards to a differential, in terms of time.

These are the really important ones. If you don't identify them, then somebody might go blind - or die.

Generally, there are clever eye tests like visually-evoked responses and badass opthalmoscopy using clever machines but nothing particular.